This is the second in a series where I review classic Irish whiskeys.

Previously we featured the Powers Signature and this time its the always popular Redbreast 12 year old. This whiskey recently won the 2019 “Worldwide whiskey trophy” at the International Wine & Spirit Competition.

When thinking about Redbreast 12, I remember walking into pubs 15 years ago when there were only 5 or 6 Irish whiskeys to choose from. It was a limited choice of Powers, Paddy, Bushmills, Jameson and so on. In some bars they had slightly more premium choices and one of those would have definitely been Redbreast 12.

Redbreast 12 is an iconic whiskey and still sits proudly within the broadening range of Irish Distillers brands and also confidently amongst a huge range of alternative options on the current  pub and retail shelves.

Similar to the first classic review we will be focusing on the actual nosing and tasting notes for this whiskey, but first as we did last time, I want to introduce you to recently appointed Irish Distillers / Pernod Ricard ABC brand ambassador Rowan Lacey. Rowan has special focus on Redbreast so is the perfect focus point for this feature.

ABC incidentally stands for Affinity Brand Co. and, as a division within Irish Distillers, focuses on the core Midleton, Redbreast and Spot range of whiskeys.

Interestingly Rowan’s background is, on the surface (pardon the soon to be obvious pun!), far removed from the world of whiskey. He graduated in 2013 with a masters in Prehistoric Archaeology and moved to France to work in Toulouse in a commercial organisation on various digs/sites. I asked him when we met for this feature why whiskey and he explained that the love of history and the physical aspect of archaeological history was well represented in the whiskey world. Historical core values and tradition carries through to the product and pervades all aspects of any discussion about whiskey.

Rowan joined the Jameson graduate programe in July 2018 having met Billy Leighton and Ger Garland at Whiskey Live in Paris in 2016. He was impressed with Billy and Ger and followed up when Ger suggested he apply for the graduate programme.

So Rowan is now back in Ireland  since August 2019 and is really enjoying the role. He has firm views about the development of the ABC range under the guidance of Ger and all at Irish Distillers. He is focused on the training of those in the trade, being an advocate for Redbreast and also conducting tastings to introduce a ever widening audience to the ABC range.

I wish Rowan the best of luck and I am sure he has the support of all whiskey fans out there.

As mentioned earlier I am focusing on the nosing and tasting of the Redbreast 12. The technical details, history etc I’ll leave to others.  I would just say that I really like the brand development and as the picture below shows there has been an evolution in the branding over the years which I believe works well. 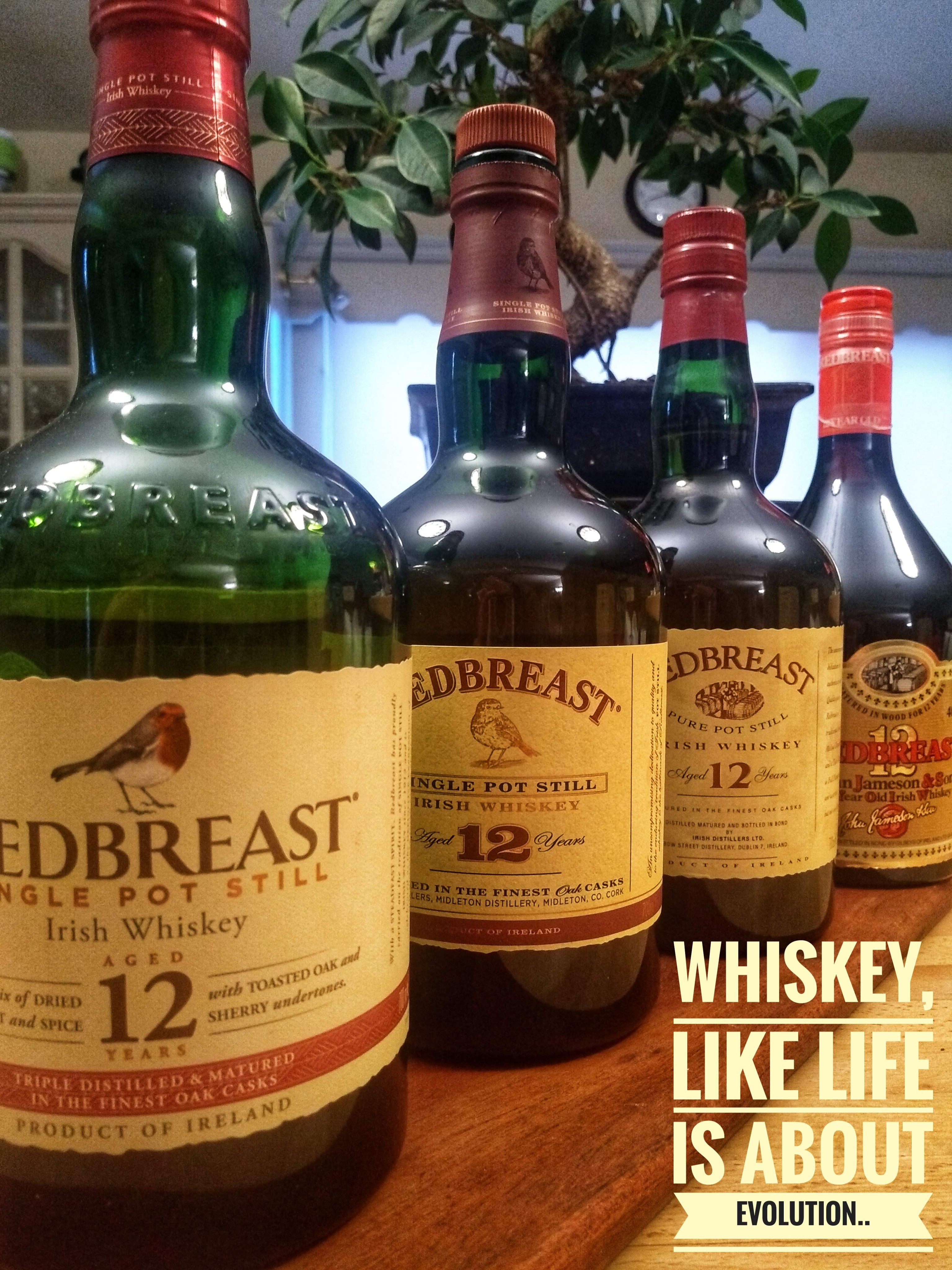 The latest range of Redbreast products have a very clean modern look but at the same time still have the classic features you would expect from this old established brand.

So… On to the whiskey itself…

As a genuine classic Redbreast 12 has always delivered consistently over the years. Its Single Pot Still spice and fabulous olorosso sherry layers have always impressed. The balance of these two influences are also accompanied by many delicate flavours and aromas that speak of Christmas and old wood.

(This is one whiskey I recommend a decent amount of decanting. If it is a brand new bottle I recommend you either let it sit in a glass for 4/5 hours before approaching or split it into 2 half bottles for a few weeks. It really benefits from opening up from oxidization).

I’m drinking an 2017 version of Redbreast 12…. after this I’ll compare it with the current bottle of 12.. Is there a change in the liquid?

Lets start with the aromas (WITHOUT WATER)

Really interesting also on the nose is its rich nature with great balance of many layers but then it has a delicacy and brightness which is testimony to the blending in this whiskey.

While the older siblings of the 12 such as the 15 and 21 have obvious weight and that impressive stone fruit that is beloved of longer aged Redbreasts, the 12 manages to deliver the flavours of sherry and spice but also stay light and bright at the same time.

Comparing with other Redbreasts in the range I think of the lustau as having a kiss of sherry, the 21 has a heavy blanket of sherry but the 12 has a warm hug of sherry!

The immediate impression is the refinement of this whiskey, zero burn and the lightness that was apparent on the nose really comes through in the mouth. In a way everything is dialed back on the palate from what came across on the nose. This is not a bad thing just interesting.

Direct translation of the nose with spice, wood and oils. The chewy nature is also there, maybe overall the whole effect is a  little less dense than the nose suggested. There is a lovely smoothness dare I say velvety impression in this whiskey. The woody oily notes are stronger than the nose and the spice has a gingery peppery nature. There is a minor sweet vanilla toffee note. The green fir notes are very faint now maybe not even there on the palate.

The rolling flavors of sherry, ginger spice, wood oils, toffee fruit, go round and round  – well composed and balanced.

Very few whiskeys can carry through ALL of the palate to the finish and this definitively does… this section is short which is not a negative its just a compliment to the quality of the finish.

WOW this is interesting.. water really changes the effect. the layers have narrowed considerably. The wood has taken on a musty nature, the green fir tree notes are mellowed but are right at the front. The wood oils are sweeter and more delicate. The spicy has no snap but is really good. It is also difficult to assess the body of the whiskey from the nose.

I am not a fan of this palate with water. The body becomes quite thin. For that reason alone this whiskey palate does not do well with water. There are some interesting sweet fruit notes and some nice white/orange fruit notes, the vanilla of the wood comes through which is quite pleasant.

So.. next how does the latest 12 compare with previous. When I tried the 2019 on its own with Ger and others I was convinced that it was different. lets see what the back to back comparison shows. 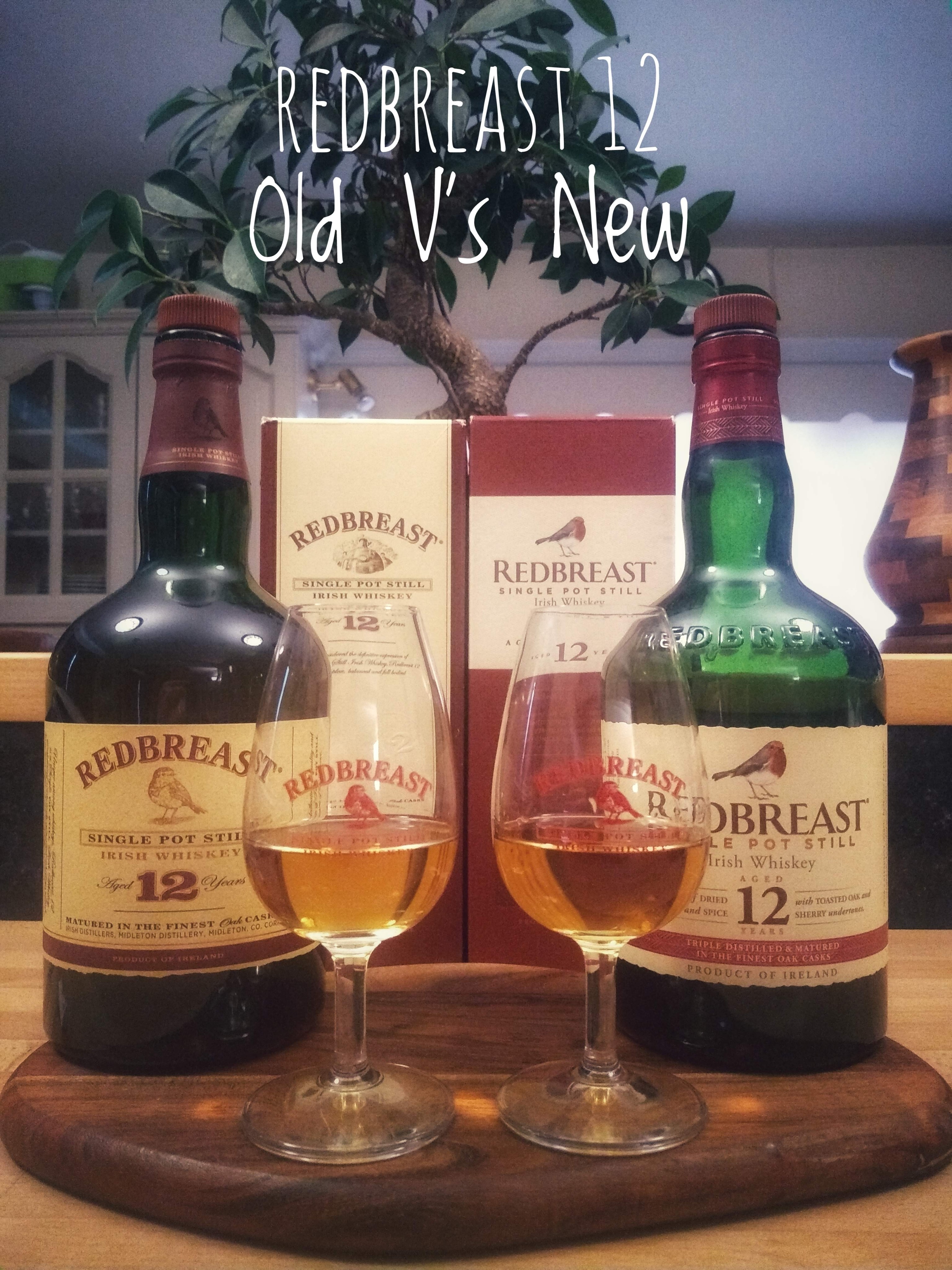 I was wrong .. there is no BIG difference in the range of aromas and flavours. There is a slight lightness on the 2019 but this could be down to batch difference. In previous years there was always the potential for differences between batches.

The 2019 seems to have slightly more sweetness and delicacy. The wood shop oils are more restrained. The spice is lighter.

I really must stress that these are subtle differences and DNA of this whiskey has not changed..

As we come to end of this classic review what are my concluding thoughts.

I’ve sometimes forgotten about Redbreast 12 in favor of more premium Redbreast whiskeys. Now having spend a great deal of time with it again I am reminded of its pure nature and would  definitely recommend it as a classic Irish whiskey.

Till the next classic review, 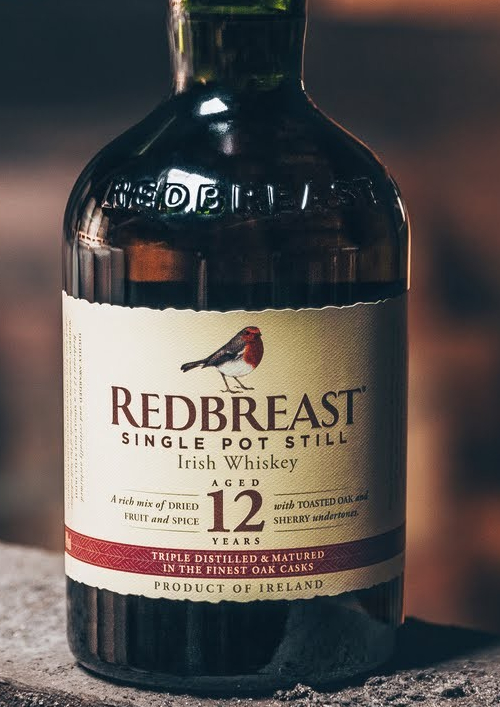